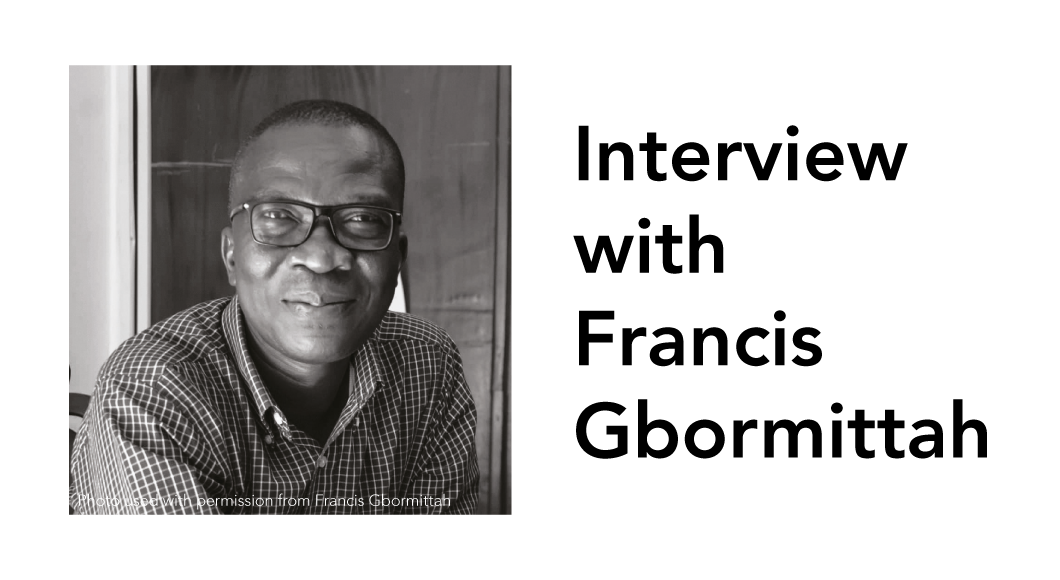 The International Authors Forum (IAF) has undertaken research into the situation of authors around the world, their work and whether they can make a living from their work. As part of the launch of the final report from this research, IAF Steering Committee member (and Director of FUIS, Italy) Katie Webb has spoken to several contributors about their organisations. In the first of this series, Francis Gbormittah tells us about how he began working with the Ghana Association of Writers (GAW) and worked his way up to President of the organisation, as well as revealing the importance of oral tradition to Ghanaian writers. Francis is an academic with a focus on media arts and practice. He currently lectures in the Department of Theatre Arts, University of Ghana, Legon, is the President of GAW and a member of the Steering Committee of the Pan-African Writers’ Association (PAWA). Francis has written scripts such as Beggar’s Plight, Wedding Blues, Manya Krobo: Memories, Identity and Cultural Heritage and SPA at 50.

Katie: Hi Francis, could you give us a summary of your work as a creator and tell us a little bit about yourself?

Francis: I’m Francis Gbormittah. My special area when it comes to creative writing is scriptwriting, although I have done some other works in non-fiction. But my main area is scriptwriting or screenwriting. I wrote many scripts for television and also for film. I did something in radio as well but not as much in these other two areas so basically, I would say I’m a screenwriter although I do creative writing in other fields. Some of the works that I’ve done, renowned ones are, for example [Beggar’s Plight], I wrote a script on wedding blues, [Aloma’s Playhouse]. Then I did a documentary, a popular documentary on [Manya Krobo: Memories, Identity and Cultural Heritage], which is a traditional area or ethnic group about an hour’s drive from the capital city.

K: How did you get into working with GAW?

F: I’m teaching at the performing arts school of the university of Ghana. Now I got into GAW when they were reorganising at some point because GAW became dormant. A student of mine, realising what I was doing with them on campus, came to me in the office and said he thinks I should be able to help this organisation. So I joined GAW in 2010 and immediately I was elected as a treasurer for the association. Then I served for about two years; I had to go and do my PhD so I took leave and when I came back they said I should be a member of the secretariat, so they took me on as an executive member without any particular portfolio. Then after that I was voted in as a Vice President and then as President now.

K: And what is the purpose of the organisation?

K: What’s the importance of a local audience to GAW writers? What’s the local context of the market for authors’ works within Ghana?

F: Basically, our market is local. Our books don’t go out, for some time now, like it used to be in the past. Today, in Ghana when you talk about authors, we will be mentioning names of people who are about 70, 80 [years old]. It will be difficult to mention names of people who are between 40, 50, 60. There ­has been a generational gap in the way our writing has an impact on people. Those 70, 80 [year-old] people are people who­ we make mention of today. Wherever I go as a Ghanaian, whenever we are talking about literary works, or books, those are the names that they mention. It means that young people, or the younger generation are writing but their writing is not making an impact internationally. It remains in the local front. Which is something that we are also thinking about making so we can have those names [known] internationally like we used to have in the past.

K: In general, in Ghana, how is the profession of a writer regarded? What kind of status or position does it have?

F: We are talking about a society that is oral. So, a writer in an oral society is revered. You have gone beyond what is normal, that is the oral form. You have gone beyond it, so you are respected in society as a writer but when it comes to earnings, what comes to you, that nobody cares about. So, at functions you will be introduced as a writer, and so what. That is how it is. It is something that people revere. You have gone beyond the normal things that we do in this part of the globe. But what? The bottom line of everything has to do, to some extent. You have to pay for everything. So, if you are even a renowned person but you cannot afford basic necessities, it becomes problematic.

K: Can you explain what you mean by an oral culture?

F: Yes, that is exactly what I mean by that. I don’t know whether you heard about the Griot in most parts of West Africa – people today you can refer to as experts in language and communication. When the chief has to send emissaries to another chief, they lead the delegation, like chief communicators. They learned that from the traditional setting. So, we can talk about writers in Africa today as modern-day Griots. It comes across from the West African region.

K: So that’s another reason why writing is important but the value system of reverence for what these people do and the reality of needing to make a living is something that needs to be reconciled, I think. And also, to give respect and to honour your culture, your ways of life, to keep that link with the history.

F: Even in the association we go beyond just writing. We have a group of people who we refer to as spoken word artists. They are also members of the association. We consider them as writers. When we talk about writing in our context, there is more to it. These spoken word artists are examples of the Griots and are considered as writers although he might not have put pen on paper to write anything. But he is the one that performs the works.

K: So, do you think the way to reconcile these oral traditions is to sustain them economically?

F: Yes, sometimes I even believe that today they make more money than those who write the books make. They go beyond being members of the association and they perform. They perform at various functions. If they have bankers’ meetings, they call them to come and perform. And they pay them good money. Even [at] national ceremonies, they are called to perform, and they are paid good money. So, they make money from what they do although it is not something published into a book. The closest they get is to publish poems, but of course poem is different from the spoken word.

Thank you to Francis Gbormittah for taking the time to speak to IAF.