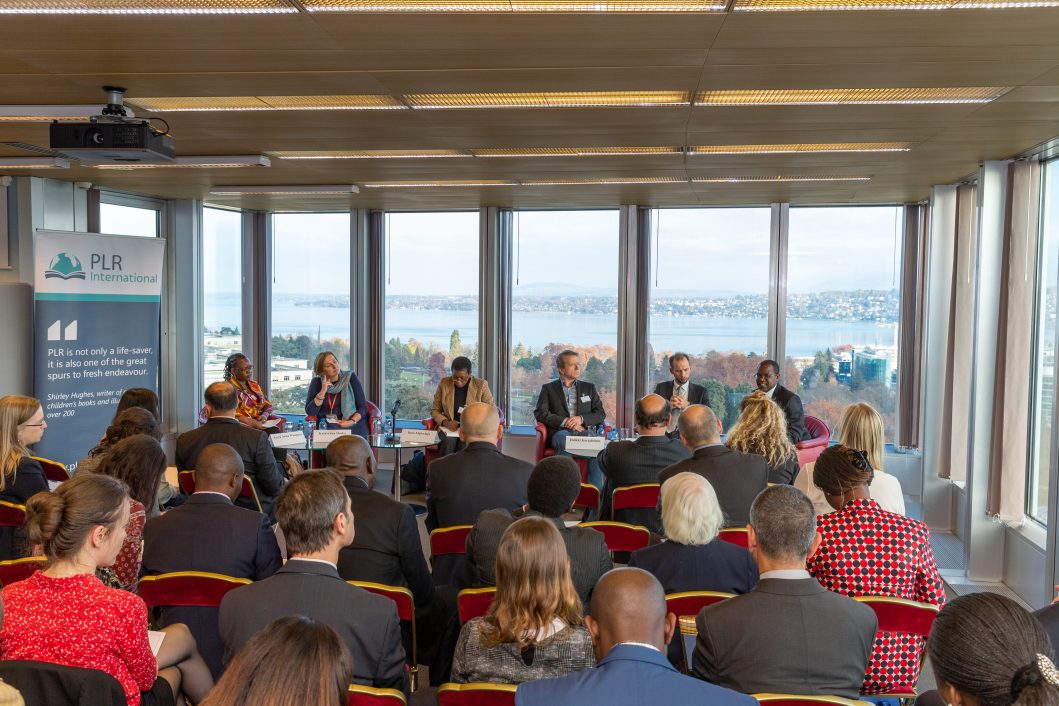 PLR International hosted a side event on 28 November 2018 at WIPO SCCR37 to discuss Public Lending Right (PLR) and its potential for authors and creative economies around the world.

Keynote speaker: The Honorable Samuel Tembenu SC, Minister of Justice and Constitutional Affairs of the Republic of Malawi

Heikki Karjalainen, President of the Finnish Association of Translators and Interpreters and Chairman of Sanasto

Andrew Staines gave an introduction discussing the history of PLR in the UK and its value to authors in addition to the recent development of the extension of PLR to properly cover ebook loans. In his keynote speech Samuel Tembenu led the audience through the ongoing establishment of a PLR system in Malawi, the first country in Africa to legislate for PLR. He discussed how PLR was established through the collaboration of key stakeholders including authors and libraries, with COSOMA working with PLR International to apply international standards of best practice. Tembenu stated how one key benefit of PLR for Malawi, a country where over 20 languages are spoken, is the support it brings to the linguistic diversity of the country by encouraging authors to write in local languages. In summarising the importance of PLR for Malawi, Tembenu said that Malawi needs readers and initiatives like PLR to encourage authors to write for them. Speaking from her experience as the Executive Director of COSOMA, Dora Makwinja said she believes PLR cannot work in a country without authors, publishers and libraries coming together to accept the concept and benefits of PLR. Makwinja stated that in Malawi these three groups support its development, and will work together to ensure it is included in the national budget, separate from library budgets.

Heikki Karjalainen spoke from his experience as a benefactor of PLR translating English fiction and non-fiction to Finnish. Karjalainen discussed how PLR is important for Finnish authors as it brings some financial stability to a profession that is generally insecure at the best of times. He stated how it is important to have PLR on the principle that an author’s copyrighted works are used when books are lent by libraries, so it is only fair to have compensation for that. Karjailanen made the point that PLR is particularly important in relatively lower population countries like Finland, where in a smaller market of readers, libraries have a significant impact on book sales. Katarzyna Ślaska discussed her experience as a stakeholder in the establishment of PLR in Poland, where she went from initially opposing to strongly supporting PLR and would now advocate its establishment in more countries. Ślaska represented the view of libraries on the Polish copyright forum which set the principles for Polish PLR. After her initial scepticism of PLR as a threat to library budgets, she came to be a strong supporter when it used separate government funding and has seen the benefits of PLR for libraries as well as for authors and publishers. Ślaska commented on the benefit of Polish PLR focusing on Polish authors and translators – by rewarding the creators of Polish language literature, it has boosted its creation.

Ayeta Wangusa discussed her experience writing in a country without PLR but, seeing the benefits of it in other countries, hoping PLR could come to be implemented in countries across Africa. Wangusa discussed how in Africa a culture of photocopying has undercut authors’ incomes, making it important to establish remuneration models like PLR. She stated that it is particularly important that more countries in Africa replicate the kinds of cultural policies that have facilitated strong creative economies in the global north, which fund the professional works of authors, such as grants, prizes and support with the professional expenses of creators.

Ambassador Staines discussed the path to establishing PLR with each panellist. Tembenu stressed the importance of central government funding so that PLR was not a burden on libraries. Karjalainen discussed how Finland secured PLR funding equivalent to other Nordic countries in 2017 following a five-year campaign that involved bringing prominent Finnish authors to meet parliamentarians and setting out the legal concepts that support PLR. Makwinja emphasised the importance of involving all stakeholders and beneficiaries of PLR throughout the process. On convincing libraries that PLR is not a threat, Ślaska said her mind was changed when it became clear that funding for PLR would not have an impact on libraries, as in Poland it is part of a separate cultural fund generated from lottery and gambling revenues; also that Polish PLR was well complemented by new dedicated funding for libraries to purchase recent Polish publications. Wangusa discussed how pan-African policy conversations were underway that she hoped would consider involving PLR International and Malawi to work together, both to show the success of PLR internationally and for Malawi to champion PLR as the example of an African scheme. In further questions from the audience, the panellists answered questions on how the variety of PLR systems around the world shows that countries can adopt an approach most suitable for their country, how the option of focusing PLR on national creators can ensure it is not a revenue stream that simply goes to the creative industries of the global north, and further how it should not be seen as a threat to library funding as it is treated separately but also typically a very small fund compared to the cost of libraries.